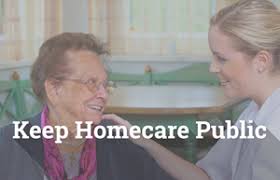 In September the Pallister Government announced its plans to implement a ‘mixed-model” home care system that smacks of privatization.

In the article The Politics of “Mixed-Model” Home Care, Mary Jean Handle and Christine Kelly, scholars in the Department of Community Services at the University of Manitoba warn that Manitoba’s home care services, described by Manitoba Health as “the oldest comprehensive, province-wide universal [home care] service in Canada” is not immune to the Pallister governments propensity to privatize.

Value Manitoba continues to track the Pallister governments policy moves and its impact on the lives of Manitobans. In doing so, we  link readers to a variety of resources including the analysis of experts like Handle and Kelly.

If you’ve come across analysis that we have missed, send it to Value Manitoba on Face Book.