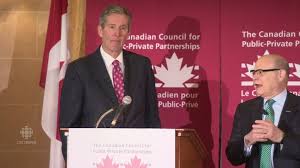 Door opened for P3s in Manitoba

Until very recently, Manitoba has been somewhat sheltered from the scourge of Public Private Partnerships (P3s) that have hit other parts of Canada. But Pallister’s government let that genie completely out of the bottle with the announcement that 4 new schools would be “P3d”. This link explains what’s going on in Manitoba and why it’s not anything to celebrate. It also explains that getting rid of the P3 legislation that the NDP brought in is a really bad idea.

Bad idea or not,  as this CBC blog explains, on May 2, 2017 Pallister endorsed the funding model  at a conference in Winnipeg on P3s:

Pallister said Manitoba was well behind the rest of the country on this funding model for public works, noting there have been 56 such projects in Canada since 2012, but only three here.

“We’re playing catch-up,” Pallister said. “We are not that innovative here.

“We have to go beyond typical taxpayer funding,” Pallister told the crowd.

Pallister says Manitoba will follow the Saskatchewan lead in using P3s to build schools. Our neighbouring province claims it will save $100 million using a P3 model. 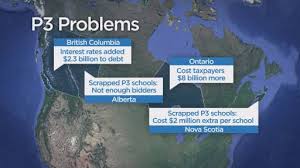 To say that’s a leap of faith is an understatement; the schools haven’t even been started yet (as of May, 2017). It’s hard to know exactly what evidence our Premier is relying on, especially since P3ing schools in Alberta and Nova Scotia was such a disaster (see first and last links in this article).

Why are P3s such a powerful force in Canada despite the lack of evidence that they work in the public interest? Just check out this advertisement for the May 2nd conference and see who’s behind them.

As this story demonstrates, lots of experts remain unconvinced.

So what is it exactly we’re catching up to, Mr. Pallister?