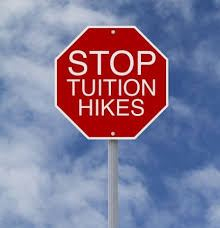 Students Say “NO” to the Pallister Government’s Tuition Hikes

The following post originally appeared in The Manitoban, University of Manitoba’s student newspaper.

Over the past two years, I have had the great pleasure of working with and representing students in Manitoba. While serving as the provincial chairperson of the Manitoba branch of the Canadian Federation of Students, I’ve heard many concerns, experiences, and anxieties from students.

Listening to students at the University of Manitoba dealing with the impact of three years of sustained budget cuts. Listening to international students across the province concerned with rapidly rising differential fees. Listening to Indigenous students whose communities fear they will be forced to send fewer students to post-secondary due to rising fees.

The only piece of legislation that provides some sort of tuition predictability and protection is now being drastically altered. On Monday, the government announced that the cap would now be increased to allow tuition increases of five per cent above the rate of inflation.

Hiking tuition fees would be a step backwards for Manitoba.

When students gathered on the steps of the legislature on Nov. 2, demanding our federal and provincial governments take decisive and meaningful action on the elimination of tuition fees, provincial finance minister Cameron Friesen said we were “fear-mongering.” Not wanting to add to our fears of spiked tuition, Friesen said that “we [the government] understand that affordability matters to students and Manitobans.”

If students truly had nothing to fear and the province understood that affordability mattered to students and their families, it would immediately protect and expand current legislation on post secondary tuition to include all students, including international, professional, and college students, all of whose tuition remains unpredictable and unregulated. It is unjust that these students’ education remains so volatile because of sporadic fee increases.

Small increases to scholarships and bursaries are not enough, especially in light of tuition hikes. Manitoba needs a comprehensive, holistic plan to open the doors of post-secondary education to anyone who wants to attend, beginning with ensuring the provincial tuition cap is applied to all students.

Post-secondary education has immense benefits for our economy, culture, and society at large. An educated society is healthier, reducing costs for the health care system and increasing societal well-being. Education reduces poverty and decreases dependence on social assistance. Education leads to lower levels of crime and increased participation in arts and culture. It will only serve to improve our province to make accessible education a priority.

Fortunately, Manitoba students are listening – to each other.

We are organizing, ready to say no to tuition hikes and yes to a positive vision for education in this province. Every Thursday, from 12:00 to 1:30 p.m. in the U of M Arts Student Lounge, students are meeting and planning for action. Anyone is welcome to join. Together, students can defeat fee hikes and education cuts and build a province that values education for all.

Michael Barkman is the chairperson of the Canadian Federation of Students – Manitoba.