On November 25, 2016, Premier Brian Pallister announced changes to the Manitoba Provincial Nominee Program (MPNP). Effective April 2017, nominated “skilled worker” applicants must pay a $500 fee, which many have argued is reminiscent of the Chinese Head Tax that was imposed on the Chinese in the early 1900s. In response, members of the immigrant and wider community mobilized together on December 5, 2016 at Broadway United Church to address Pallister’s new Labour Market Strategy for immigrants. From this meeting, the Save MPNP Coalition was formed, which has worked towards stopping the changes to the MPNP. 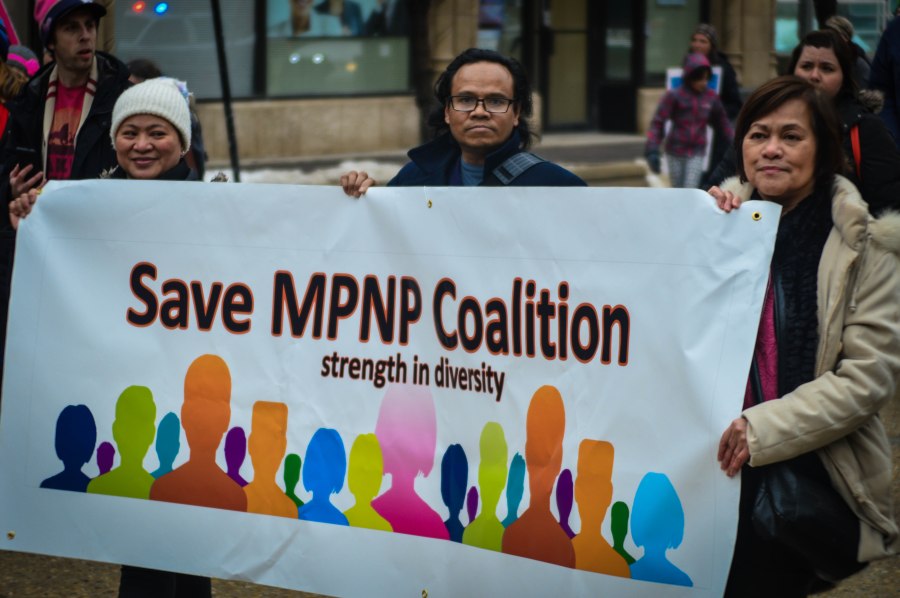 Organized by two community organizations, Friends of Filipino Immigrants in Manitoba and Migrante, a public forum was held on January 4, 2017 to discuss the implication of the changes of the MPNP on immigrants. Shiela Cornejo, a member of the Save MPNP Coalition, like many others in attendance, arrived to Manitoba under the program. “The fee is a cash grab and would only place a financial burden on the family,” she said. Although the government has stated that the $500 fee will be re-invested into language support programs, the MPNP already requires nominees to enter Canada with a high level of English skill. Helal Mohiuddim, who came from Bangladesh in 2004 says “The MPNP already requires nominees to pass IELTS or NCLC as proof of English or French language skills.”

However, instead of viewing the new head tax as merely an economic attack, others in attendance also expressed that the changes to the MPNP was a larger attack on their community as a whole. “This is racism—portraying us as a burden and linking newcomers to welfare,” says Liza Fontillas. However, according to Statistics Canada,[1] the rate of employment in 2011 for Manitoba immigrants was the highest (82.5%) of all provinces, and their unemployment rate (6.0%) was the second lowest. As Zita Somakoko passionately points out, “The Canadian Economy was built on the backs of immigrants’ Echoing similar sentiments, George Wong says, “We take whatever jobs we can get even in the worst conditions just so we can support our families.”

In addition, the MPNP is moving away from family sponsorship and community connection to employer-driven nominations, which will make bringing family and friends more difficult unless they already have jobs. “Without our loved ones, we have no purpose to stay here,” says Leoni Conchada. She adds, “This would not only make workers more vulnerable to abuses and exploitation in the workplace but also jeopardize the 86% retention rate of immigrants staying in Manitoba under the MPNP.”

“Like our indigenous brothers and sisters who face the constant threat of colonialism, under the Western imperialist control, many of us from the third world have been forced to escape the poverty back home only to take up exploitative work here,” says Migrante organizer Levy Abad. As is the reality with other immigrants, many are forced to participate in precarious working conditions where their labour is valued but their human potential is not. More generally, the changes to the MPNP would have important consequences not only for immigrants but for racialized workers who are Canadian citizens and permanent residents who are also being targeted by racist and xenophobic harassment for “stealing Canadian jobs.”

As a community, we must act together and work together, and stand in solidarity with our immigrant brothers and sisters! If we let the government do as they please, what will prevent them from imposing another change that will only benefit a select few? Let’s put an end to Pallister’s anti-immigrant policies!

To get involved, we will meet Wednesday, Feb. 8, 2017 at 6-8pm at the Hive at the University of Winnipeg. You can find us on Facebook at Save MPNP for more information!

Please come and show your support for our next upcoming events!

Details: We will assemble at Broadway United Church (396 Broadway) followed by a march to the Legislative Building for a 30 minute program, and then head back to the church for a night of solidarity with food and music!

Details: We will assemble outside the Legislative Building for a 30 minute rally.