Premier Pallister gave new meaning to the Truth and Reconciliation Commission (TRC) “Calls to Action” during his State of the Province address to the Manitoba Chamber of  Commerce this week.

The Premier expressed his gratitude for the work of Judge Murray Sinclair and the TRC. As a “symbolic” gesture of reconciliation, the Premier announced that he would ride his bicycle from the old Peguis Reserve near Selkirk Manitoba, to the new Peguis First Nation to thank its members for the help they gave to Selkirk settlers. 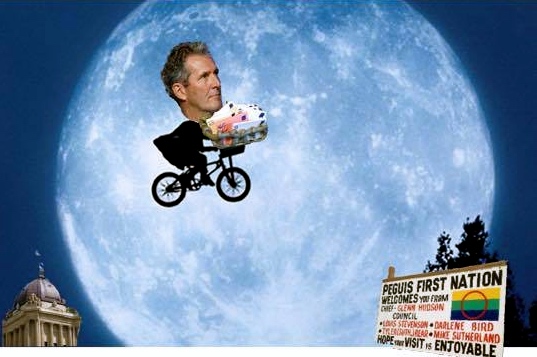 It’s difficult to take seriously his sudden interest in reconciliation when just last week he lambasted Indigenous NDP MLA Nahanni Fontaine, saying she did nothing for Indigenous women in her job as special advisor on Indigenous women’s issues for the previous government. Fontaine is recognized nationally for her advocacy work on missing and murdered Indigenous women and girls. This attack on her was unfair and arguably an attempt to deflect from his government’s lack of action on this critical issue.

It’s lovely to know that our Premier will set off on a bicycle adventure next summer to Peguis First Nation, armed with a basket full of thank you cards.  But responding to the TRC Calls to Action will require more than a “participaction” approach.

The TRC describes specific policy and program actions that the provincial government must take “to redress the legacy of residential schools and advance the process of Canadian reconciliation.” It outlines specific actions for governments in the area of Child Welfare, Education, Languages and Culture, Health and Justice.

After years of research and listening to the painful stories of residential school survivors and their families, the TRC has provided us with a detailed roadmap toward reconciliation. We have a long journey ahead … and the province isn’t getting any closer, no matter how many miles Pallister puts in on his bike.

The Premier might want to scrap the bicycle ride and spend his time getting down to the real work of reconciliation. It’s a serious matter that deserves attention, hard work, and real commitment, not just a photo op on his summer vacation.